Why has the centenary of Erzberger's violent death only been commemorated within national boundaries so far? Wouldn't it be helpful for many others in Europe and beyond to share Germany's "Erzberger Year 2021" culture of memory? At the initial events earlier this year, the Aufa100 founder seemed to appear as the only non-German participant.

A hundred years ago, in Spring/Summer 1921, the German peace politician published a pamphlet with the title: Solidarism. Europe's Salvation and Future, Mönchengladbach 1921. See below. With specials thanks to Dr. Alfons Siegel, Germany.

Erzberger's assassination in the Black Forest, just weeks following the fascinating and augural publication, should appeal to today's democrats from East to West: Transcend the national cultures of remembrance!

One month later in Paris, the British Delegation under the lead of David Lloyd George and the British Empire Delegation under the lead of Jan Christiaan Smuts captured the Conference on which no negotiations took place: Germany as a democratically transforming Armistice applicant remained excluded until the final setting, May-June 1919. Their initial and secretly obtained successes between January 18th and February 15th 1919, as Woodrow Wilson, the US Delegation Leader, sailed home and Lloyd George returned to London, were the secret "colonization" of the conference, the entrapping of Wilson to comply with their imperialist and subimperialist (H. Poeschel 1920, A.S. Kanya-Forstner 2000) designs, first of all the unscrupulous manipulation of the League concept. Both the American and the British-British duo were formally sticking to the novel concept of an international organization, because nobody was prepared to overrule this being a principle issue of the 1918 Armistice Agreement. 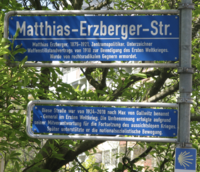